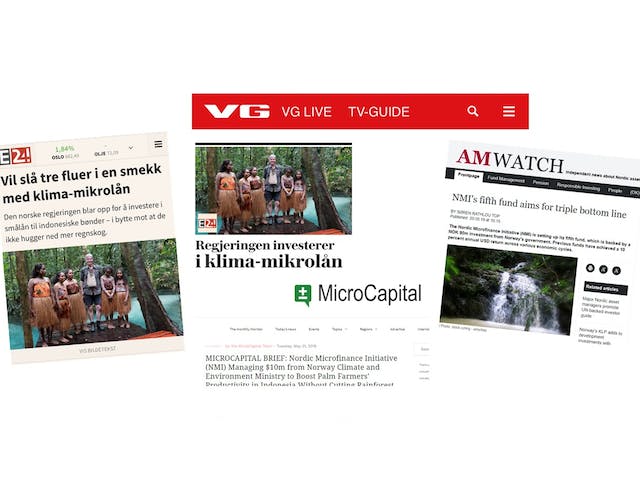 The Norwegian Ministry of Climate and Environment has invested 90 million NOK (~10 million USD) in a Climate Smart Microfinance Fund set up by NMI. Through attractive loans and agricultural assistance, the climate fund will make Indonesian smallholders intensify work on their existing plots instead of clearing rainforest.

Links:
News story at E24.no and VG.no (in Norwegian)
Press release at regjeringen.no (Government.no), The Norwegian Ministry of Climate and Environment (in Norwegian)

Indonesian small holder farmers will be offered favourable micro loans to increase the production of palm oil without further encroaching on the rainforest. The Ministry of Climate and Environment contributes NOK 90 million in a microfinance fund aimed at small holder farmers and will help to slow the cutting down of the rainforest west of Borneo. The Climate Fund is managed by Nordic Microfinance Initiative AS (NMI), a Nordic public-private partnership with 11 years of experience in microfinance investments, including in Indonesia.

- Both in Indonesia and globally, it is undoubtedly possible to increase both food production and the production of raw materials without cutting down more rainforest by growing more efficiently on existing land. Therefore, we want to support a fund that provides loans to farmers in order to increase palm oil production on their existing agricultural land, without clearing more rainforest, says Minister of Climate and Environment Ola Elvestuen.

- We are pleased with the support and enthusiasm the Ministry has shown by financing the first step in this innovative climate initiative. NMI believes that there are great opportunities for using proven microfinance techniques adapted to local conditions to achieve climate goals. Private investors will be invited into the fund as soon as we have proved that the concept works, says Arthur Sletteberg, CEO of NMI.

One of the reasons for chopping down the rainforest in Indonesia is inefficient operation and little access to capital. Therefore, the solution for many small farmers has been to clear new land. Through simple measures, the harvest from existing plantations can be increased considerably, thus reducing the need for clearing new production areas.

- The Climate Fund will offer the small farmers in West Kalimantan in Borneo both long-term working capital and agricultural professional assistance. In turn, the peasant farmers must commit not to clear the rainforest, says Sletteberg.

NMI will establish a local presence in West Kalimantan, and the loans will be administered by local and well-established microfinance institutions. Satellite monitoring in combination with close local follow-up shall ensure that specific climate goals are achieved.

- Recently, we have seen that Indonesia's reforms to care for forests and peat bogs seem to work. The last two years have seen a sharp decline in the deforestation of primeval forests. Therefore, we think it is important to support the good work that is being done to reduce deforestation in Indonesia, says Minister of Climate and Environment Ola Elvestuen.

*Translated from press release in Norwegian at regjeringen.no by NMI