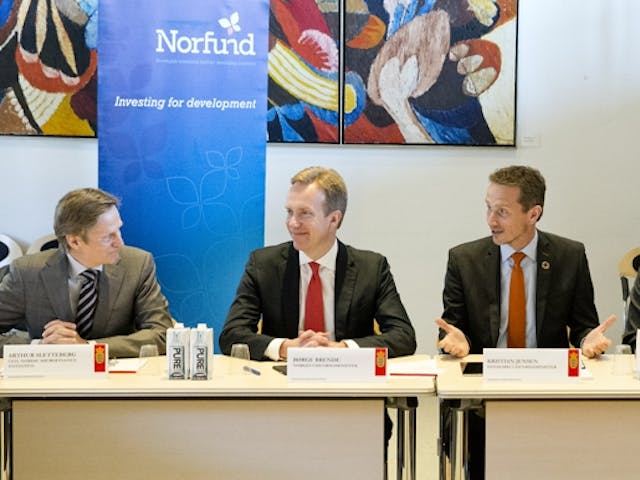 Foreign Minister Børge Brende participated in the launch of Nordic Microfinance Initiative (NMI). This is a new Nordic cooperation between Norwegian private investors and the state investment funds of Norfund from Norway and "Investeringsfonden for Udviklingslande" (IFU) from Denmark. The total capital investment is around NOK 715 million.

"By giving poor people access to financial services they need in order to save, borrow and invest, NMI contributes to the first and most ambitious sustainability goal - eradicating poverty. Private sector development is a prerequisite for economic growth in developing countries and is a main priority for Norwegian development policy. I am glad that NMI has now become a collaboration between the Nordic countries, and I look forward to following the fund further," said Mr. Brende.

NMI will invest, on a commercially and socially sustainable basis, in medium-sized microfinance institutions in East Africa, and South and Southeast Asia, where there is a potential for further growth.

"Microfinance is an important instrument in development policy. It allows poor people to borrow money to invest in their own future and thus improve their living conditions. I am very pleased that we have managed to achieve this public private partnership that includes Norfund and IFU and ensures an increased capital base for this important work," said the Danish Foreign Minister Kristian Jensen.

"Since 2008, NMI has helped create jobs and promote economic and social sustainability in developing countries. With IFU as part of the team, NMI can be further developed to become a leading Nordic microfinance platform. This will allow NMI to continue to develop microfinance institutions and provide financial services to even more people. This applies particularly to women, who are an important target group in development," said Managing Director of Norfund, Kjell Roland.

The private Nordic investors contribute 45 percent of total capital of NOK 715 million. Norfund and IFU contribute the remaining 55 percent. Ferd, which is one of Norway’s largest private companies, is one of the private investors in the Nordic Microfinance Initiative.

"The reason for the initiative in 2007 was that Norway was in a good position to help reduce poverty by giving people access to financial services. This included solid institutions such as Norfund, Norad and private risk-inclined investors, who all had a common desire to make a difference and provided a big dose of vigor. We then established Norwegian Microfinance Initiative. Today we reach nearly 5 million poor people through our direct investments and far more through other fund investments. We look forward to expanding this initiative together with IFU," said Johan H. Andresen, Owner and Chairman of Ferd.

"I am very pleased that we have created a strong public-private Nordic cooperation in microfinance. We see this as a first step towards an even broader platform with the participation of private investors from several Nordic countries. Therefore, we will be able to further intensify efforts to provide financial services to poor people's development," said CEO of the IFU, Tommy Thomsen.

"This Nordic cooperation represents a major milestone for NMI. We have been very fortunate to have strong and active Norwegian owners. The addition of IFU will not only strengthen this group, but also enable us to establish and develop a Nordic platform for microfinance investment. This expansion will enable NMI to make a great contribution to the creation of jobs, wealth, and economic and social sustainability of poor people in developing countries," said Arthur Sletteberg, Managing Director of NMI.