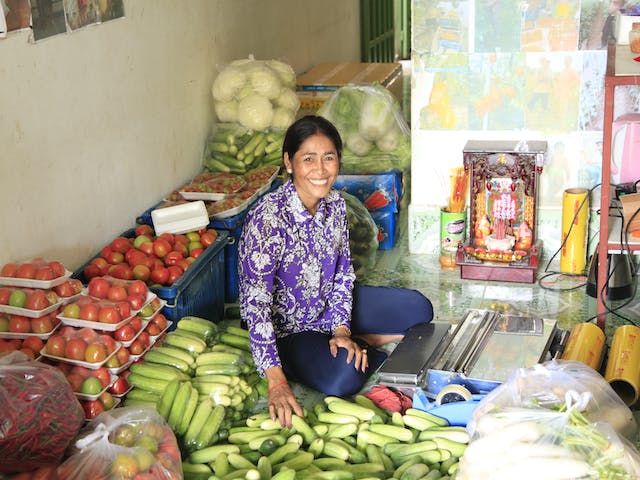 Now living in Kien Svay District, Kandal Province, Mrs. Chanthy gave up her education at Grade 7 and in 2002 married Mr. Eath, who is from Kampong Thom Province. At the time of their marriage both were working in the same factory and were just renting a room in the Phnom Penh. As times were becoming difficult because of their growing family needs, they decided to return to Kien Svay to live with her parents. Mr. Eath was a tuktuk driver in Phnom Penh and worked day and night to support their family.

During Mr. Eath’s time as a tuktuk driver, he got to know different supermarkets and shops, and learned of the growing appetite of consumers for fresh organic vegetables. With contacts and an idea, the inspiration to start growing vegetables began. In 2013 and with a US$300 investment, he set off to grow vegetables in a rented plot of land.

Although initially very challenging, the couple persisted with high commitment to their business. As demand for their vegetables increased yearly, Mrs. Chanthy realized that it was the right opportunity for them to grow further and so they decided to take financing from Sathapana Bank. When the need arises, they apply for loan with the bank to support their business growth.

Today, they supply between 500 kg to 800 kg of vegetables every day which earn them a few thousand dollar monthly profit for the family.