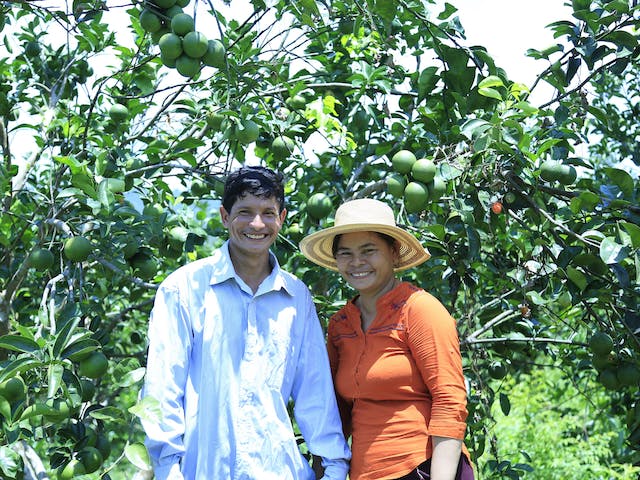 PRASAC, Cambodia: Rous Sreyneang, 36, and her husband So Narin, are currently orange farmers owning 20 hectares of land at the foot of Kravanh mountains, located in Veal village, Samrong commune, Phnom Kravanh district in Pursat, a northwest province of Cambodia famous for sweet and delicious oranges. They are married with 3 children.

Sreyneang said that she was born and grew up in Svay Rieng, a southeast province, but moved to live in this exotic area more than 10 years ago, while her husband Narin is from Kampong Cham, an eastern province of Cambodia.

They first came here to work for other people in the orange plantations. Through their effort and strong passion, both of them have always tried to find ways to improve their living conditions. They dreamed of having their own orange farm and house in the area but did not have enough money as their living wage was so meagre.

One day, there was a credit officer from PRASAC travelling to promote loan service in this far flung region. They decided to request a loan, in 2012, for the first amount of USD 5,000 to buy land to build a house to be used as a grocery business with collateral support from her mother. After getting their first loan, the couple had a new business with the ability to repay monthly interest easily.

Luck was on their side. Not so long afterwards, there was an urgent sale of fertile land at a decent price. They then approached PRASAC for the second time to ask for an additional loan of USD 8,000 to buy the land. They started to grow orange trees on the land and made a good profit.

They didn’t stop at this point. Seeing the improvement in their lives, they later asked for more loans to expand their farming business. They managed to buy more plots of land to grow more oranges. Their last loan amount is USD 40,000 with a loan term of 10 years.

“I am very grateful to PRASAC for giving us loans. The loans changed our lives completely in a better way – starting from scratch to owning a decent house and orange farming,” said Sreyneang. “We also managed to send our children to a downtown school.”

Sreyneang said that all of the oranges they planted are pre-ordered by merchants in Phnom Penh, so their income is secured as the market demand is high. In the future, they want to buy their own transportation truck to supply directly to the market by themselves.