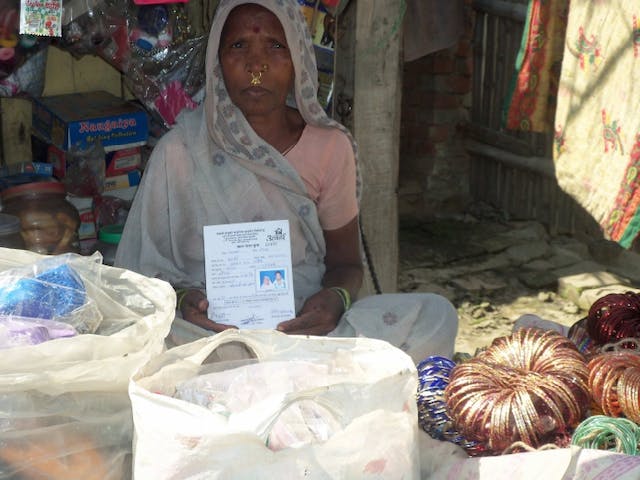 Shanti Devi (45) hails from a sleepy village of one the poorest districts of Uttar Pradesh, Jaunpur in India. As she recites her story and struggle of her life her eyes get filled with tears and at the same time her face glows with confidence and pride which she regained after 15 years of struggle. Shanti’s story is almost same as most of the poor women in eastern Uttar Pradesh where they fight daily for survival. Till 12 years back her life was running smoothly with husband working in Mumbai and earning enough to manage the family of four, which included their two sons. Beside this, they had a ration shop which was managed and run by Shanti herself at her local village which earned her an added income beside her husband’s income. Unfortunately, twelve years back her husband fell seriously ill and had to return back to his native village (Bhaisa) in Chandvak block and subsequently he lost his job, too. Five years back Shanti’s younger daughter in-law fell seriously ill and both these situations made Shanti’s life miserable. She had a hard time managing the expenses occurring out of medicine and treatment of her husband and her daughter in-law. The only source of income was her ration shop which slowly and gradually started to get into loss due to lack of capital and the condition of Shanti and her family business deteriorated. She had to borrow from family members and money lenders for continuing her business and treatment of two of her family members. Soon her elder son also deserted her in midst of this troublesome period and went back to his native village with his family. As the expenses were increasing with addition of one new member in the family (granddaughter) the expenses of the family increased, and Shanti had to send her younger son to Mumbai for earning some extra money. But this also did not work well, and his son had to return back as the situation of the father worsened. It was one year ago that Shanti came to know about Utkarsh from one of her neighbours and client of Utkarsh, named Rita, and the credit help she can avail from Utkarsh Microfinance to expand her business. Shanti though initially hesitantly of taking loan and joining such group, but finally approached the group members and became one of its active members. In the first cycle she availed loan of Rs. 6,000 (~USD 85) and with this amount she started the business of selling cosmetic goods. This business of cosmetics slowly and gradually started to pick up. Shanti chirpily and happily showcases her shop and explains her progression from her unhappy past to happy future. Shanti in the meantime gained confidence and understood the importance of microfinance companies like Utkarsh. After successfully repaying the first cycle of loan she took second loan of Rs 12,000 (~USD 170) and this time not only to expand her business of cosmetics and beauty products but also to revive her business of Ration (grocery) which is very close to her heart. Today Shanti is a happy woman with two granddaughters happily playing around her and husband gradually recovering from the disease. She explains that due to the increased income from her new business she has been able to repay her old debts and could also afford better treatment for her husband and daughter in-law who is now perfectly healthy and helps her mother in-law in her business as well as household work. Shanti proudly tells that Utkarsh loan has tremendously helped her to increase her business and earn enough to lead a decent life for her and her family. She also tells that whenever some members of her group are not able to repay timely instalments of their loan, she helps them out. Shanti has become a live example for all other members of her group and she happily narrates that she has regained her pride which she lost due to poverty and illness of her husband. Shanti is now hoping to take third cycle higher loan and also involve her son in the business thus fulfilling her duties as mother. She says Utkarsh microfinance in one such organization which “I trust and have full faith”, feel secure, last but not the least it never harmed my dignity and intruded on my privacy as member.