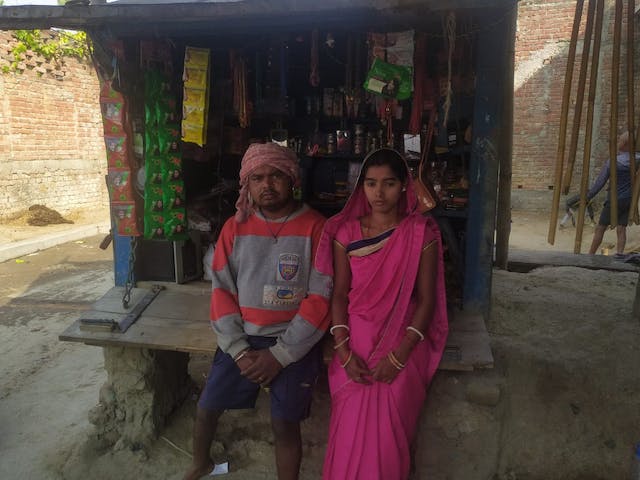 Sindhuja, India: When a person is determined to do something, then any obstacle cannot stop her path. A similar story is of a couple named Geeta Devi and Suraj Paswan of Kandi village in Jamui district in Bihar. Suraj is disabled from both the legs due to polio since childhood. He is married to Geeta Devi who is almost uneducated. Suraj's father used to manage all the expenses of the house as Suraj was unable to do any kind of manual labor. Life was going on in some way when Geeta Devi's father-in-law died of illness. Now both husband and wife started facing financial difficulty in running the house. The couple had three children to support. In this difficult situation, Geeta Devi along with her husband thought of starting a small business. But they had no money for this work. Geeta however was aware that some of her neighbours had taken loan from Sindhuja Microcredit. She then approached the members and expressed her desire to join their group to avail credit from Sindhuja. The members informed her regarding the rules of the group, limit of loan, interest and insurance etc. Geeta Devi was included in the group with everyone's consent. In the first cycle, Geeta Devi took a loan of 25 thousand Rupees ($340) from Sindhuja Micro Credit and opened a small shop in the nearby market. She started selling make-up items to the women of her village. She started earning reasonably well. Geeta Devi maintained debt discipline in the group and repaid all her installments on time. Seeing the success of her small venture she thought of expanding her business. She then availed Rs 40,000 ($545) in the second cycle. She opened a small shop selling snacks apart from her shop of make-up items. Both husband and wife are running the business together. This has given lot of confidence to Geeta Devi. Geeta Devi could thus not only earn money to support her family but also became an example of courage, grit and determination in her village.