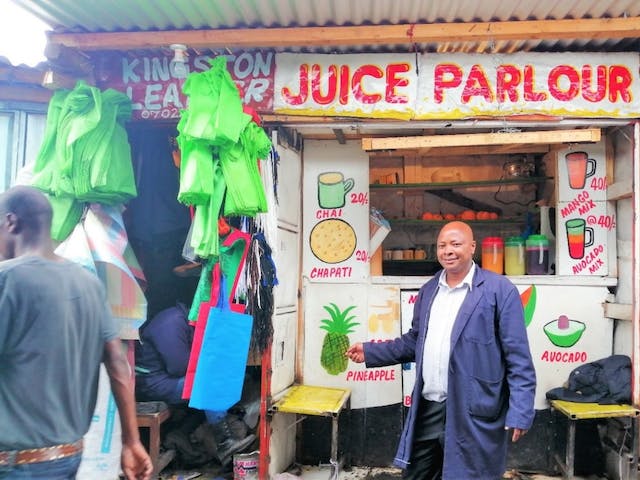 Musoni, Kenya: “Habari Chairman” he is constantly greeted on our way to his shop. You can tell he is a respected man around the Gikomba area in Nairobi, Kenya. Geoffrey Kangéthe, popularly known as Kimani is a businessman and Musoni client. I ask him why he is that popular, he says his work involves a lot of relationship building and he has created a good rapport with his clients, and business neighbours over the years.

Kimani heard about Musoni 3 years ago from his niece who at the time had borrowed school fees loan. The repayment terms were flexible, and he was shocked that she could access a large amount of money with little requirements and instantly on her mobile phone. This came at a time when he was also looking for a loan to expand his shoe shop. He could not believe it and the next day he made his first visit to the Gikomba branch where he has since remained a loyal client.

Selling of second-hand clothes commonly called mitumba in Kenya is a popular business idea for small-scale traders. Very many successful businesspeople in Kenya have cut their teeth in mitumba business before becoming successful in other business ventures. Same as the case for Kimani. He started by selling wholesale second-hand shoes at the Majengo area and all shoe accessories e.g., shoelaces and inner soles. He was making a kill in this business, so he decided to open another one in the densely occupied and visited part of Gikomba, the marketplace. He shares with us that he feels good that he opened a business for his wife and for the other shop; he runs it with his youngest daughter who assists him when she is home on school break.

“Over the years in business at Gikomba market, I noticed a need” he reveals. He explains that he saw a gap in the nature of work for businesspeople at the market who are always on the move and only have time for quick meals. It is then that he decided to open a fresh juice bar business, which also serves tea for those who want something warm during cold seasons. He discloses that the move was lucrative and earns him good money to take care of his family.