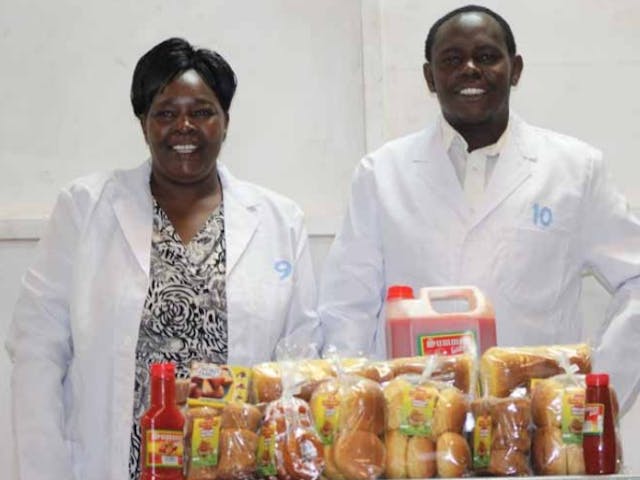 KWFT, KENYA: Through her thriving relationship with KWFT, Mwikali has established a manufacturing plant that aims to have a footprint locally and internationally.

Lydia Mwikali Muithya is the entrepreneur behind Nutrition Technologies, an award-winning manufacturing outfit located in Mumbuni, Machakos county in Kenya. A serial entrepreneur who has been in business throughout her life, she came up with an idea of purifying and bottling drinking water which she sold in the vast dry parts of Machakos. After only two years, her company has diversified into baking and manufacturing of tomato sauce, chilli sauce and baking powder. Indeed, it is the bakery business that has really changed the fortunes of the company. Their baking product range goes by the name: Sweet delights and comprises mandazi, buns, scones, muffins and doughnuts. Owing to the massive demand for the products, the company has brought in a fleet of five vehicles to aid in distribution. The company makes impressive turnover every month, besides making a positive impact on the lives of the local residents. Without any doubt, the product offering has turned out to be a favourite with the local residents. Through the company’s corporate social responsibility (CSR) approach, she has employed dozens of youth and women in the area, thereby changing their lives significantly. “I wanted to uplift the lives of local youth and women who were sitting idle due to lack of employment,” she offers. Mwikali runs the growing enterprise with assistance from her son, Geoffrey Matheka, a food science graduate. Together, they have worked tirelessly to establish a footing in the food industry. Their company has grown from strength to strength within a short span of only two years. “We started Sun Fresh, a water-purification and bottling plant in 2012 with a seed capital of Khs 150,000 (~USD 1,500) from our own savings,” Mwikali explains. After a positive reception in the market, the company sought to increase production capacity to reach more customers in far flung areas. As with any other business on a growth trajectory, they needed funds to finance their growth.

This being the case, the family’s cordial relationship with a leading microfinance bank, KWFT, came in handy. The mother of four came to learn of KWFT in 2012 through a field officer. She later learnt that she could borrow a loan as an individual and went for it. “We borrowed a loan in 2012 which we repaid in a year,” says Mwikali. Before long, the company which started with only three employees expanded its production capacity and revamped its distribution channels. A year later, the company embarked on increasing its product offering to include tomato sauce and baking powder after getting another loan from the same institution. Since then, her life has changed for the better. “I have been able to carry myself with dignity because I can now sustain myself and my business. The KWFT loans have helped me in a big way, both in business and in my family. KWFT has made ordinary women noble. I was happy the bank listened to us,” she proudly shares. Besides the loans, her relationship with the microfinance institution has enabled her to teach women groups in the area about financial literacy. For her trailblazing business venture, she won accolades from fellow women in the area and beyond. Last year she scooped the platinum category of the annual CITI-AMFI entrepreneurship awards which underpinned her mercurial success. Her determination, she says, is to see fellow women uplifted economically. Her son says that through the company, they were able to help many people uplift their lives. Asked why they settled on the water bottling plant, Matheka, who heads the company’s operations says, “The water plant was a good choice in terms of cash flow and revenues since it targets the mass market. However, we have now introduced other products because we wanted to be a one-stop shop for families around here.”

At some point, Mwikali operated a wholesale and retail shop outside Machakos town. With an aim of creating a vast business empire, she has gradually initiated her sons into business as a succession planning strategy. A mother of four sons, two in business and two in school, she clearly understands the power of a close-knit family in running any form of business. “We started by educating our children first and upon maturity we introduced them to business to gain various skills.” Together with her son, they have developed the company’s product line and jointly make critical decisions affecting the thriving enterprise.

For them, building a successful brand has been their key interest. After seeing their products perform well in the market, they have embarked on improving their quality. Mwikali says that the company operates as a fully-fledged professional firm with requisite departments headed by qualified staff. They already have human resource, production, sales and finance departments while plans are underway to set up a quality control department. She says that by hiring non-family members, the business gets new ideas needed for sustainability. It is argued that for a business to grow successfully, it must be driven by some values. According to the duo, focus, discipline and character are the three values that they have inculcated into the business and which have borne fruits. “Without such values, you can successfully run a business for 20 years but bring it down in a single day,” advises Matheka. On her part, Mwikali says that her secret is trusting in God and partnering with like-minded organizations like KWFT. A focused woman, she owes her success in entrepreneurship to her discipline in repaying loans. She says that through this, she has been able to develop long lasting relationships with her financial partners. Her son reckons that by repaying small loans promptly, they have graduated to higher ones.

We are targeting the mass market to grow our revenues. We are anticipating more growth as we conquer more sales territories and we are currently eyeing the huge Nairobi Eastland’s market,” says a confident Matheka. He adds that the company will soon introduce white and brown vinegar into its product range. They also plan to begin a flour milling plant to revamp her bakery business and sees the company morphing into a pan African baker in the near future. Challenges in the recent past, the cost of doing business in Kenya has risen significantly thus posing a raft of challenges to existing and prospective enterprises. At Nutrition Technologies for instance, cut-throat competition that characterises the manufacturing industry is one of the challenges. The purchasing of high cost equipment for baking and packaging is another hurdle that the company has to deal with as it eyes expansion.

Mwikali advises entrepreneurs not to fear starting businesses. If need be, they should not hesitate to get funding from financial institutions. ”Go for loans and use them prudently, and you will succeed.” The manufacturer is banking on acquisitions to position itself as a pan African baker in the near future. With constant product re-engineering and an ambitious growth and expansion plans in the pipeline, there is nothing to stop them from claiming a top position in the manufacturing industry.