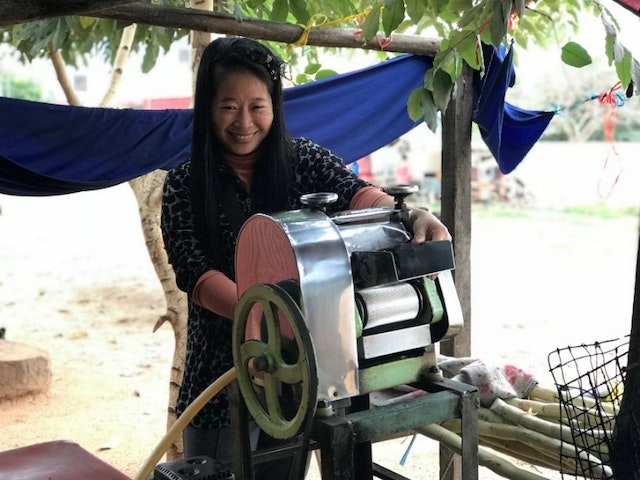 Mrs. Tann Vanna serves different types of food such as meatballs, bread, eggs, beverages including sugar cane juice. Her husband was previously a tricycle driver, but he has stopped running that business and he migrates to work in Japan in agricultural factory in since 2017.

Mrs. Tann Vanna used to borrow 2 cycles of group loan from AMK for a long time back, but in early 2107 she returned to AMK as she knew that she can get a big individual loan from AMK and this time she took an individual loan instead. She borrows KHR 20,000,000 (~USD 5,000) with the term of 36 months for her food sale business expansion by using her land title as the collateral. But after getting the money, she changed her mind by using the loan for constructing a new home instead of investing money in her store. On her return to AMK, she does not take only the loan, but she also buys micro-insurance product for herself and her husband from AMK after very careful and detailed explanation from AMK credit officer (CO). She pays only KHR 50,000 (~USD 12.5) to get 2 micro-insurances that last for 12 months for herself and her husband. Mrs. Tann Vanna said, “I never expected getting any compensation from purchasing AMK micro-insurance and it costs only KHR 25,000 (~USD 6.25) for one micro-insurance.”

On 4th September 2017, it was a very busy day for her, and she was the only person who serves clients in her food sale store. After serving the order food to clients in her store, some clients ordered a couple glasses of sugar cane juice. As it was a very busy day, she felt so tired from serving in her store. While she is trying to squeeze her sugar cane with her automat machine, she accidentally placed right hand in the automat machine. Her right hand was completely broken and then she was sent to public hospital in Battambang. She had to stay in hospital for 28 days so that the doctor can closely monitor her condition until the doctor is sure that she can check out. During her stay in hospital, she spent a total of KHR 800,000 (~USD 200).

After checking out from hospital, she has processed all the document with the AMK CO to claim the compensation. In about one week after submitting all the relevant document to AMK, she gets the compensation of KHR 560,000 (~USD 140) for her 28-day stay in the hospital. Mrs. Vann said, “I do not wish to get sick or accident so as to get compensation from AMK after buying this micro-insurance product, but it is a shield to protect me from unforeseen expense. AMK micro-insurance really helps me when I get that unintentional accident and I witness that AMK does not cheat on its client. Moreover, the process of claiming is very simple and fast.” When she is asked about her future plans for insurance usage, she replied, “I am willing to continue using AMK micro-insurance product as I have experience with this product and I got the compensation from AMK.”